From Principle to Practice: Protecting civilians in violent contexts

Following on from the ACMC Australian Guidelines for the Protection of Civilians (2015) this handbook aims to provide the ‘what’, the ‘why’ and the ‘how’ of protecting civilians in violent contexts and is intended for people working at the operational level including government, NGOs, UN and other organisations. 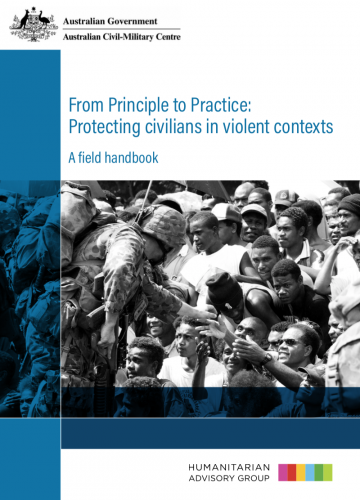 It is fitting that this handbook is launched on the milestone of both the 20-year anniversary of United Nations Security Council Resolution 1265 (1999), and the 70th-year anniversary of the Geneva Conventions. This field handbook ‘From Principle to Practice: Protecting civilians in violent contexts’ aims to further operationalise the legal frameworks that underpin the Protection of Civilians (PoC) and bring the 2015 Australian Guidelines on the Protection of Civilians to life.

This resource is accessible and will be used by those who are deployed into violent contexts where civilians are at risk of harm. For militaries, aid organisations, police and civilian government agencies, this field handbook paints a picture of what protecting civilians actually looks like, and provides examples, tools and resources to enhance the effectiveness and the coordination of protective activities.

This handbook contributes to a growing body of work on what PoC looks like on the ground, and provides the context around who is providing protection, how and why. The evolving character of modern conflicts requires the interaction of people who serve as diplomats, in legal roles and in command, control and communication functions in the military and in international organisations. This handbook is for those who are actually faced with the decisions, the planning and the outcomes of keeping people safe. Without resources such as this, the legal frameworks would remain just that.

It is our hope that this field handbook will be used by those who are sent to uphold these frameworks and the result will be fewer civilians harmed and more protection for the most vulnerable in our world. 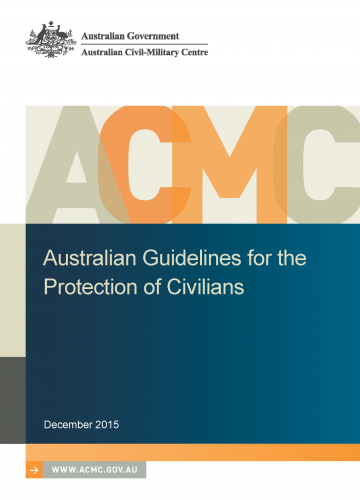 Australian Guidelines for the Protection of Civilians

Lead Author/s
Australian Civil-Military Centre
A whole-of-government perspective on the Protection of Civilians (POC) in international situations of armed conflict and other situations of violence.
Close