The aim of this paper is to outline a number of key challenges as they relate to the logistic aspects of disaster preparation and response, and to discuss the areas in which the development of closer civil-military cooperation could be of particular benefit. 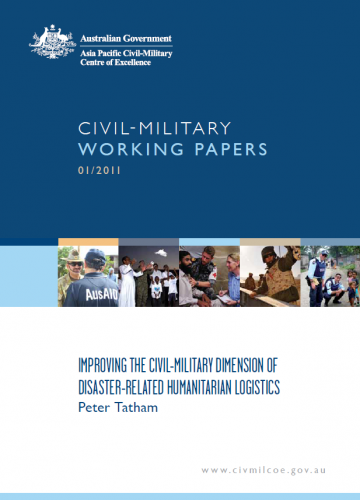 The 21st Century has seen a significant rise in all forms of disasters and this has resulted in military and humanitarian personnel becoming more frequently engaged in the provision of support to those affected. Achieving an efficient and effective logistic preparation and response is one of the key elements in mitigating the impact of events, but the establishment of mechanisms to deliver an appropriately integrated civil/military approach remains elusive. Whilst the challenges inherent in the interface between military and humanitarian organisations and personnel are fully acknowledged, it is argued that the development of an improved way of working is of major importance. Failure to do so, will lead to a continuation of unnecessary loss of life and/or suffering for those affected. Not least because of the high percentage of assistance budgets spent on logistics, this area represents fertile ground for developing improved processes and understanding, especially when faced with the challenges of assessing the beneficiaries’ needs and of inter-agency coordination. In practice, the demands placed on both civilian and military logisticians are broadly similar, as is the solution space. By speaking a common language and using common concepts, it is argued, therefore, that the logistic profession should be in the vanguard of attempts to develop an improved civil/military interface