Responders to natural disasters face increasingly complex operating environments, characterised by new challenges and new actors. Global trends that are overwhelming the international humanitarian system come into sharp focus in South-East Asia. These trends include climate change, rapid urbanisation, inequality, food and energy-price volatility and population growth.2 In 2013, more than one third of all disasters worldwide (natural and human-induced) occurred in Asia, with significant loss of life (more than 21,000 people) and an economic cost of US$62 billion.3 In this context, there has been an increase in the number and variety of stakeholders involved in disaster response in the region, including the regular presence of national and international military forces, and increasingly police, as critical stakeholders in the response.

To foster understanding and improve planning, preparedness and response, international responders need to understand the disaster response context, how different actors and stakeholders interact, and the differing civilian, military and police perspectives on disaster response. 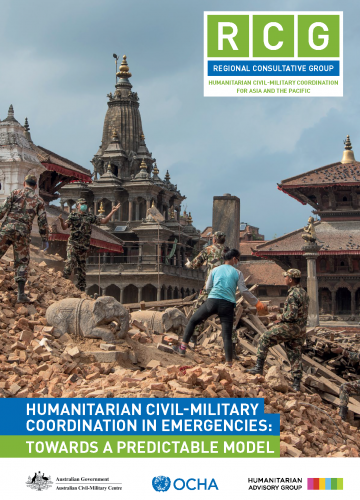 Humanitarian Civil-Military Coordination in Emergencies: Towards a predictable Model

Lead Author/s
Josie Flint
A focus on the coordination of operational planning between civilian and military actors in priority countries in the region–Bangladesh, Nepal, Indonesia, Myanmar and the Philippines.
Close