Building a Culture of Protection: 20 Years of Security Council Engagement on the Protection of Civilians 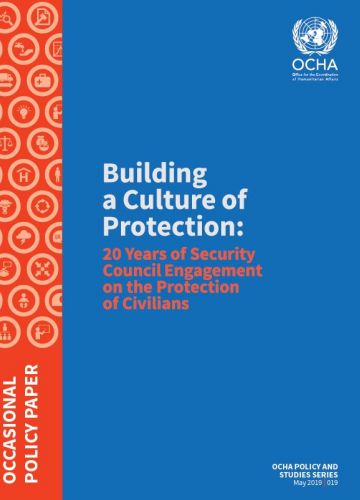 2019 marks the twentieth year since the protection of civilians in armed conflict (PoC) became a specific item on the agenda of the Security Council. In 1999, at the close of a decade marked by genocide in Rwanda, atrocities in the Balkans, and brutality and displacement in West Africa and the Great Lakes region, the Council formally recognized the relevance of PoC to international peace and security. As memorably put by Lloyd Axworthy, then Minister of Foreign Affairs of Canada, which had resolutely spearheaded the effort to add PoC to the Council’s agenda, the Council thereby acknowledged that PoC “is no sideshow to the Council’s mandate for ensuring international peace and security; it is central to it.

The ultimate aim of the Council’s work is to safeguard the security of the world’s people, not just the States in which they live.” The twentieth anniversary of the Security Council’s PoC agenda provides an opportune moment to review progress made in the past, build on present insights and chart the course for the future, with a focus on achieving tangible improvements for the protection of civilians on the ground. In September 2018, the Council requested that the Secretary-General include in his next PoC Report a summary of achievements and challenges to the work of the United Nations on PoC over the past 20 years. The present study seeks to complement the Secretary- General’s report by taking stock of the Security Council’s engagement with PoC.

This research does not seek to be comprehensive or exhaustive, but to review key developments of the Council’s PoC agenda, both from a normative and a practical perspective. It also seeks to identify focus areas deserving further attention and progress, and to contribute to reflections for strengthening PoC in the years and decades to come.