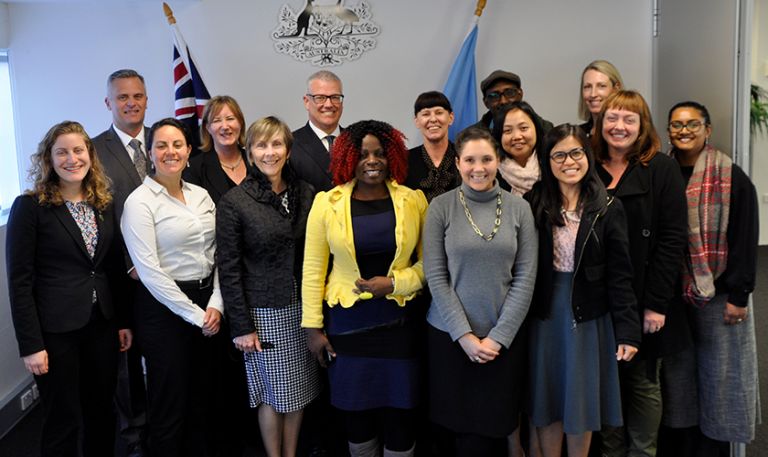 In 2018, the Office for Women in the department of Prime Minister and Cabinet (PM&C) led the whole-of-government development for the second Australian National Action Plan (NAP) on Women, Peace and Security encompassing the period 2018 to 2024. A key element for the successful implementation of the new NAP is strengthening the Gender Advisors role across Australian Government departments and agencies. As the Final Independent Review of the first NAP (2018) recommended, implementation across Government departments and agencies it is crucial continue the appointment, resourcing, and professional development of gender advisors (PM&C 2018:6). The Gender Advisors appointed in DFAT, Defence, the ADF, and AFP become the custodians of the operationalisation of Women, Peace, and Security. Moreover, their commitment with the WPS Agenda is a fundamental to Australia’s Regional and Global leadership in WPS.

Australian Gender Advisors face different, but organisational-specific, challenges in accomplishing their duties. Common elements such as lack of personnel, training, and budget resources to develop their role exist across institutions. Current duty statements for Gender Advisors may not accurately reflect the duties Advisors are performing in the field, nor the expectations placed upon them. The duties of the role depend on the mission environment, and the scope of functions depends on the engagement of the commander or mission leader with the WPS Agenda, and the level of comfort individual commanders or mission leaders have with the WPS Agenda.

Based on my research and time spent with Gender Advisors across Australian institutions, mainstreaming of the WPS Agenda will continue to take time. In line with global experiences, Advisors report the need to spend a great proportion of their time explaining their roles and normalising their input for planning teams. This is likely to continue as commanders and mission leaders become more comfortable with the value of gender analysis to operational planning.

Currently, Gender Advisors do not have the tools to measure the impact of their role in operations. The impact of quantitative data adversely impacts on information transfer about the Australia Gender Advisor role overseas and the collection and analysis lessons learned. The publication of case studies, both successes and challenges, could help to achieve operational aims and increase awareness in the general public about the role.

It is important to continue strengthening the informal networking of gender advisors across Agencies/Departments, as this allows for consistency in application of Australian policy approaches, mutual support and greater impact in operations. For example, WPS is mainstreamed throughout ACMC training workshops to improve civil-military-police cooperation, and ACMC provides a crucial role in promoting and informing knowledge about WPS and with Gender Advisors. Workshops are an opportunity to clarify concepts, explore institutional differences between gender perspectives and how each organisation can meet their requirements under the National Action Plan (2018-2024) in implementing the WPS Agenda. The more institutions invest time and personnel resources to become aware of, or work directly with, the WPS Agenda will result in greater comfort with the value the Gender Advisor role plays in responding to crises and emergencies overseas.

It is crucial to open a space where the Gender Advisors have the opportunity to report and talk about their experiences overseas and the impact their role had on responses and operations. Currently there is no physical or virtual arena where Gender Advisors returning to Australia from overseas operations can share their experiences. This is key to broader and better understanding of the role, as well as to capture more practical examples. In turn the operationalisation of WPS will evolve. Additionally, it is crucial to formally evaluate and publish the impact of the Gender Advisor role and collect lessons learned.

Equally, it is vital to broaden knowledge of the WPS language and to recruit new voices. Currently, WPS is a relatively closed space in the Australian Public Service. Developing and broadening informal networks across Australian Government institutions will assist in mainstreaming the WPS Agenda beyond a small Australian Public Service cohort. Broadening the understanding of the WPS Agenda might also include the promotion of mixed Gender Advisor teams, as well as strengthening the Gender Focal Points position and include them in some activities and trainings of the Gender Advisor Network.

In the Australian Department of Defence, the inclusion of WPS into existing military doctrine is key. The separation of WPS as its own doctrine piece limits the mainstreaming of the Agenda, however there does not appear to be a consensus of how to achieve this integration. WPS should be considered routine for planning, not as an exception. It is also necessary to include a gender definition across military doctrine. Some voices expressed that the ADF internal cultural reform and the implementation of WPS on operations needs to be separated. However, others have expressed that the incorporation of WPS in doctrine needs to include the participation of women in ADF and in leadership positions. I agree with this second vision. It is impossible to incorporate WPS and gender analysis in operations as part of the doctrine and in the core military training without a real change in the gender culture in the security institutions. More needs to be done to benchmark Gender training, particularly in Defence. Finally, I want to say thank you to all of incredible women and men that are working hardly in the Australian institutions and overseas to improve the gender perspective in operations. Their voices are creating a positive and necessary change. Peace and Security must include gender perspective.

Ms Isabella Sinisterra-Beron is a Rotary Peace Fellow completing a Master of Peace and Conflict Studies at the University of Queensland who undertook an internship at the Australian Civil-Military Centre (ACMC) from November 2018 to February 2019. This work was conducted for the ACMC and informed by research discussions conducted on condition of anonymity with Australian government officials from the Australian Defence Force, Department of Foreign Affairs and Trade, Australian Federal Police, Australian Civil-Military Centre. Views are the author’s own. This article is published under a Creative Commons Licence and may be republished with attribution.

Australian Department of Defense 2018 ‘Women, Peace, and Security in Defense’ Available at http://www.defence.gov.au/jcg/Women_Peace_Security/

Department of the Prime Minister and Cabinet: Office for Women 2018 ‘Final Independent Review of the National Action Plan on Women Peace and Security 2012-2018. 24 October. Coffey.