The Philippines: After the Fighting in Marawi

In expelling Islamic State-affiliated insurgents and reclaiming the city of Marawi, the Armed Forces of the Philippines ensured a problem of months did not metastasise into a problem of decades. But what are the prospects for rebuilding its people, communities and institutions? 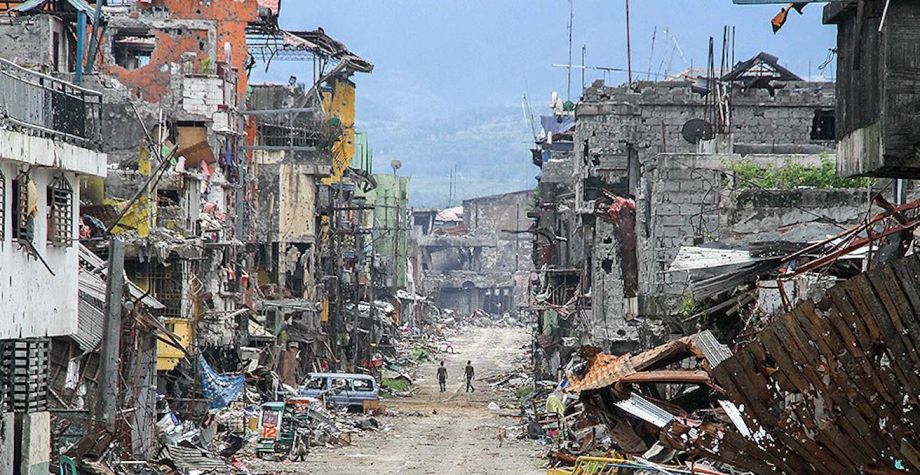 In expelling Islamic State-affiliated insurgents and reclaiming the city of Marawi, the Armed Forces of the Philippines ensured a problem of months did not metastasise into a problem of decades. But what are the prospects for rebuilding its people, communities and institutions?

While the five-month campaign to uproot the Islamic State and Affiliated Groups (ISAG) may be over, the protracted challenge of reconstruction, recovery and rehabilitation (R3) ahead is as important as the active war. In this, we can see one of the conundrums of urban warfare: the battle is won in the way a nation provides physical reconstruction, economic recovery and human rehabilitation post-conflict.

Urban warfare is particularly messy business, with substantial impact on civilian population. In Marawi, an estimated 360,000 internally displaced persons (IDPs) were impacted by the fighting. Long-term refugees extend the humanitarian fallout from a conflict, creating ongoing security and protection issues in under-resourced evacuation centres and fostering extremism in vulnerable populations. In order to combat the persistent threat of radicalisation and to prevent future conflict, the Filipino government established inter-agency Task Force Bangon Marawi (TFBM) to coordinate the joint civil-military response needed for true post-conflict R3. Yet it is hindered by allegations that the military was negligent of the second and third-order effects of its operational conduct.

Ordinance barrages to ‘soften up’ Marawi ahead of ground troop assaults made it safer for the military and likely played a role in reducing their casualties. But it also destroyed public and private property, industry and economic infrastructure and displaced markets as an estimated cost of AUD$2.4 billion. Furthermore, unexploded ordinance contaminate the city alongside debris from all the collapsed structures, preventing IDPs from returning home and hindering economic and social recovery.

Post-conflict community-building has been difficult, and the Armed Forces of the Philippines (AFP) has been losing the communications battle. Despite allegations that ISAG-Philippines used women and children as hostages and human shields, and that their use of improvised explosive devices contributed significant damage to Marawi, the post-conflict narrative has been poorly managed. The Filipino government has largely failed to educate, inform and communicate effectively with refugees whom, in their frustration, have begun to slowly shift the blame for their predicament from the insurgent forces to the government.

Little has been done to counter criticism of the military and accusations of excessive force have not yet been properly addressed in the media. This represents a problem for post-conflict rebuilding as it creates space for a resurgent enemy to manipulate popular discontent. It can drive vulnerable civilians back towards violent extremists when they should be angry about the deplorable conduct of ISAG-Philippines. The government needs a clearer strategic communication plan that is proactive and pre-emptive: one which pragmatically emphasises the realities of applying force in dense, urban environments to the refugees of Marawi.

The slowly-slowly modus operandi employed in other urban battle-spaces, including by the Iraqi Armed Forces in Mosul, would likely not have been feasible in this context. The military could not clear Marawi house by house as the concentration of adversaries, the caches of weapons, strongholds and hidden rooms in most buildings—essentially making Marawi a fortified, criminal ghetto—would have imposed an unacceptably high cost in terms of lives. The military needed to accept some risk and damage, but their reasons must be communicated to the IDPs who, understandably, can’t just accept the ruination of their city without projecting some of their anger onto the government.

That said, this graphic video of the fighting by 1Lt Bala Tamayo of the Special Forces 134 Vishnu company is an example of AFP post-conflict communications efforts. The narrator attributes the worst of the violence to foreign fighters from Malaysia and Indonesia who “infiltrated the Philippines through backdoors from the south”. This reflects a broader whole-of-government effort to unify the nation in the aftermath of the conflict, behind a narrative blaming foreigners. This fails to address the remaining indigenous remnants of ISAG-Philippines. A seemingly short-sighted strategy that brushes over unresolved longer-term discontent, the intent is to reconcile the government with the local clan power structures and the refugees in the Autonomous Region of Muslim Mindanao with whom they need to work going forward.

The economic and institutional recovery component of R3 is also a challenge in Marawi, where years of corrupt law enforcement and ineffective municipal government had led to an informal governance system. The only functioning economy had been a shadow one, based on illegal drugs, firearms and kidnapping for ransom, that converged with violent extremist groups. Marawi’s R3 requires the Filipino authorities to collaborate with the local clan leaders, as any significant development projects will require approval and input from those power structures so that they are not rejected. Simultaneously, the government must plan long-term for an economic recovery that benefits the citizens of Marawi and undermines the power of those very clan leaders. Post-conflict R3 will require substantial institutional development, including law-enforcement and service-delivery for citizenry, to avoid back-sliding into a volatile security situation.

Rebuilding infrastructure is the easy part of a R3 post-conflict response; rebuilding people, communities and institutions is much harder. Filipino Defense Secretary Delfin N. Lorenzana has been a strong public advocate for prioritising survivor-led community recovery and peacebuilding alongside the need for physical (re)construction and economic recovery, stating “it is only when the people have morally recovered that we can finally say that Marawi has risen again”. Demonstrating a nuanced understanding that the post-conflict challenges ahead go beyond providing common goods like roads and bridges, and setting the only acceptable end-state as the social healing of all affected persons, would indicate the Philippines is committed to the R3 of Marawi long into the future.

This work was conducted for the ACMC and informed by research discussions conducted on condition of anonymity with Australian and US government officials from the Australian Defence Force, Department of Foreign Affairs and Trade, Australian Federal Police, Australian Civil-Military Centre, United States Pacific Command, United States Army, Center for Excellence in Disaster Management and Humanitarian Assistance and the United Nations Office for the Coordination of Humanitarian Affairs.

This article is published under a Creative Commons Licence and may be republished with attribution.