10 Years of The ACMC

The ACMC received strong endorsement from the Senate Standing Committee on Foreign Affairs and Trade in its 2008 Report of the Inquiry into Australia’s Involvement in Peace Operations. But from its very inception it was clear that the range of complex operations involving Australian agencies was too broad to restrict the ACMC’s activities to peace operations or disaster response.

Wherever Australian military, police and civilian officials are sent on operations they will need to coordinate their efforts with other government authorities; international organizations; non-government organizations; civil-society groups and the private sector.

The speed of events, the scale of humanitarian effect and the 24/7 immediacy of every sort of media, means that all personnel working in a mission or an operation need to be fully prepared to work with novel and unanticipated partners at little or no notice.

Given these pressures, it is remarkable how the early vision for the ACMC has withstood the test of time and of ever more challenging operations. What are some of our successes?

It has been an incredibly busy and rewarding decade. There are many other lines of work to explore, particularly as we move into providing the multiagency ‘backbone’ to Joint and interagency taskforces. We have been fortunate to have many passionate and dedicated staff move through our ranks and from here move out to work on our behalf in other workforces.

The ACMC is a monument to everyone who has worked here and who continues to work here. If you want to see what they’ve achieved – keep clicking! 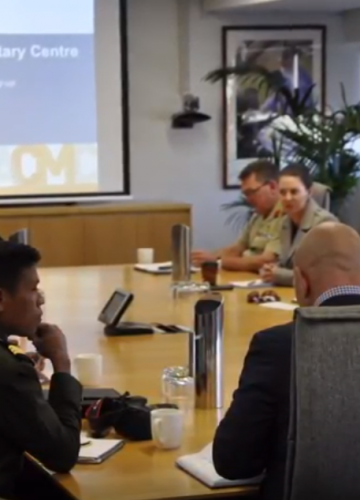 Video: ACMC on a page